As I sit down to write this message, I find myself dealing with a wide range of emotions. Earlier this week we got news that one of our 4:13 Strong graduates was involved in a shooting incident and had lost his life.

I was immediately flooded by a feeling of overwhelming sadness. But I was also a little anxious. I did not know any of the details about what led to the shooting and I was fearful that maybe Marquice had allowed himself to get mixed up with the wrong people who were doing the wrong things. While it seemed unlikely that Marquice would slip like that, the world seems to have a way of luring young men into the trap of living for the moment. Unfortunately, 4:13 Strong has a list of young men we have worked with who have escaped from their past only to get tripped up and pulled back into it.

Just two weeks ago, Marquice stopped by the 4:13 Strong campus unannounced to speak with our current class of guys. He had just received a promotion and raise at work and was so excited that he wanted to come by and share the news with everyone. He took 15 minutes to speak to the class. He encouraged them and promised them that all the hard work they were investing in the program was worth the effort and it would pay off for them in the end. It was a great message that had more impact coming from Marquice than it would have had coming from any of the 4:13 Strong leaders.

Throughout the evening of the shooting, several of us started sharing some of our Marquice stories and pictures. The picture that brought me the most comfort was the one of Marquice getting baptized. Even though he came to 4:13 Strong with a lot of questions, a lot of issues and a lot of anger, Marquice took in everything that we had to offer. You could see a physical change in Marquice over the six months that he was with us. He stood a little taller, he spoke more confidently, and his troubles seemed to become more manageable. 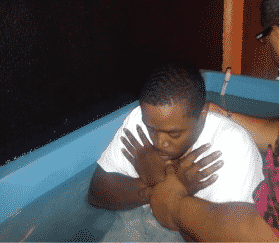 Throughout the evening of the shooting, we started to learn more about what happened. Marquice was concerned about some of the people his ex-girlfriend (the mother of his three children) were allowing their children to spend time with – specifically, her boyfriend. Her boyfriend had been convicted on charges of sexual misconduct with young children and Marquice was adamant that he did not want his kids to be around him. When Marquice showed up at the mother’s apartment Monday after work to pick up the kids, the boyfriend and two other men were waiting for him. With all three children present, these men confronted Marquice. A fist-fight broke out and then one of the men pulled out a gun and shot Marquice. All three men then fled the scene and are still in hiding.

After learning about the circumstances around the shooting, a new wave of emotions hit me. I found myself consumed by anger…how cowardly for a man to resort to violence to solve his issues and then run away and hide. But over the past 24 hours as I have had some time to process all that has happened, my anger is slowly being replaced by pride. I am so proud of Marquice and the man he had become. He became the father to his kids that he never had. He stood up for what was right, even in the face of danger. He died trying to protect his children from danger.

I am still so angry about what happened to Marquice, but I take comfort in knowing that God can take what man intended for evil and use it for His good. I don’t know how and I don’t know when, but I do know that God will use this senseless and cowardly act of violence to advance His kingdom.

I am so thankful that God brought Marquice to 4:13 Strong. He will be missed by many, but his memory and his example of how to be a real man will live on forever.